At the end of each year we like to look back and discuss some of the significant things that happened with our service including milestones, new features and improvements.

So before we get to this year lets start with evaluating a major feature we introduced at the tail end of last year called burst tokens. Since we introduced this feature we've had many customers tell us it has provided them with the confidence to make a purchase by quelling their usage anxiety. Before this feature customers had to guess what they thought their usage would be in the future and many found this difficult.

The cushion provided by burst tokens has helped to alleviate this decision burden and as a result we've seen an increase in free customers converting to paid plans.

In late December last year we also introduced a major update to our Cross-Origin Resource Sharing (CORS) feature enabling the use of wildcard sub-domains and the addition of an API endpoint to alter your domains in an automated way.

These changes helped greatly expand the usage of CORS by 191% compared to 2020 and many customers told us the wildcard support was the main reason they began using this feature due to the speed in which they could now deploy it across their entire domain with a single entry.

Last year saw us finally launch North American nodes in December 2020 and we added two more this year in January 2021 and November 2021. We've seen our US based traffic steadily increase throughout the year thus the introduction of several new servers.

Traffic in general doubled this year over 2020 with the majority of that originating in North America. Our infrastructure has held up great and we are in the process of swapping out older nodes for newer hardware. The newest server we introduced in November 2021 (LETO) is now our most powerful server node and has become the new baseline for what we procure going forward.

In addition to growing our physical infrastructure we also made many investments in our virtual infrastructure. We've been able to handle the influx of customers and their traffic without incident while maintaining fast database coherency within our cluster. We use a custom database and cluster architecture in part to maximise our hardware and offer the most affordable pricing by not relying on expensive commercial solutions.

At the beginning of the year we introduced a new change log interface featuring color coded categories for the different kinds of changes we make. 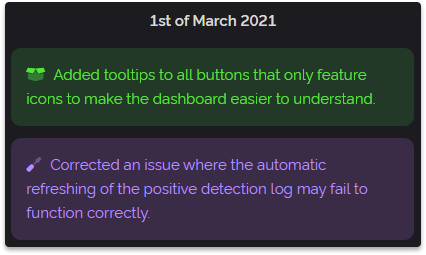 This has been a joy for us to use as we take great satisfaction in detailing the work we do to make our service better for you.

One big change we did to the Dashboard this year has been the automatic refreshing of the positive detection log. We saw based on our analytics that many customers liked to leave the dashboard open for long periods of time so we looked at ways to improve this through live updating. We followed this up recently with a realtime QPS (Queries Per Second) display which has been well received.

A huge feature we introduced in 2019 was Custom Rules. This is the feature that enables customers to fully tailor how our API responds to their queries. And at the very beginning of this year we built upon this feature with a Custom Rule Library which currently contains 26 pre-made rules which you can import to your account and then edit. Since introducing this library we've seen rule use by accounts increase by 267% when compared to 2020.

We found rules to be so empowering for our customers that we wanted to enhance it further and so we added the ability to import and export individual rules and we increased the quantity of rules that our customers can have enabled at any one moment. Various UI improvements were made to make rules easier to create and manage and we also introduced new condition types and API provided value options.

This year we expanded the control you have over your account by enabling you to delete your account using a button within the Dashboard. Prior to this you needed to contact support to have your account and all associated data removed from our service which we felt was unduly burdensome.

We believe it should always be as easy to leave a service and take your data with you as it was to signup in the first place. In addition to these manual account controls we also introduced automatic account deleting for when it's clear an account hasn't been used and there's no good reason for us to keep your data any longer.

When it comes to the website we mostly do pruning and tweaking. But in August this year we made a dramatic change in the introduction of a dark mode. You may even be using it right now to read this very post! - This feature took a lot of time to get right but we're very happy with it.

In addition to the dark mode we followed this up with an overall design overhaul we call Glass which introduced our topological map background to all our webpages and changed our Raleway font to normalise number heights.

When it comes to the API and general technical advances. We transitioned our v1 API to become a v2 API proxy. We introduced support for HTTP/3 with QUIC, we updated our API backend from PHP 7.x to 8.1.x and we significantly reduced our payload sizes through header pruning.

In addition to all of those changes we introduced two new dated versions of the API that provided more data in our API results like organisation names and operator data. And speaking of operator data..

Operator data which includes detailed data cards like the screenshot above were one of the major features we introduced this year. We now have more than 50 VPN providers profiled in this manner with more being added weekly. This has been a huge boost for our customers who rely on accurate VPN data, just being able to specifically say which VPN service an IP is being operated by is extremely conclusive and thus drives decision making confidence.

And so that has been our 2021 highlight reel filled with lots of growth, new features and improvements. We did leave out some things for brevity like our PHP client library gaining CORS and multi-IP checking support, some of the specific UI enhancements we did across the site, small-screen device usability improvements and UTF-8 support on the API among others but the things we felt were most important got a blog post and a full mention above.

Traditionally we have made any pricing changes to the service in January. We didn't do that in 2021 and we're not planning to do that in 2022 either. We feel the price of our plans right now is good and see no reason to change them at this time.

In closing we hope everyone had a great year like we did. Thanks for reading and happy holidays!