Almost one year ago on January 20th 2021 we introduced a new feature called the custom rule library. This was a new menu within the customer dashboard that contained pre-made rule templates that you could import into your account and then tailor to your specific needs.

This has been a very well received feature that lead to a huge increase in the usage of custom rules by our customers throughout last year.

But there has been something lacking. What happens when you import a rule from the library that needs to change over time. For example lets say you want to create a rule that applies to a specific companies network but over time their network will expand and the rule may no longer encompass their entire infrastructure.

That is where managed rules come in. We still have the same rule templates as before which we're now calling self-managed rules but in addition to that we've added what we call proxycheck.io managed rules.

As the above screenshot shows the rule library now has new buttons in the top for displaying self-managed or proxycheck.io managed rules. We want to be clear we're still committed to self-managed rules and in-fact every managed rule we create going forward will have a self-managed version available for easy templating.

To explain how it works, when you add a managed rule to your account we will control the conditions that trigger that rule for you. Whenever we update that rule in the library your saved version will also be updated automatically. You still get to name the rule and alter the rule outputs as we only manage the conditions for the rule. Below is a screenshot showing how an expanded managed rule looks in the dashboard. 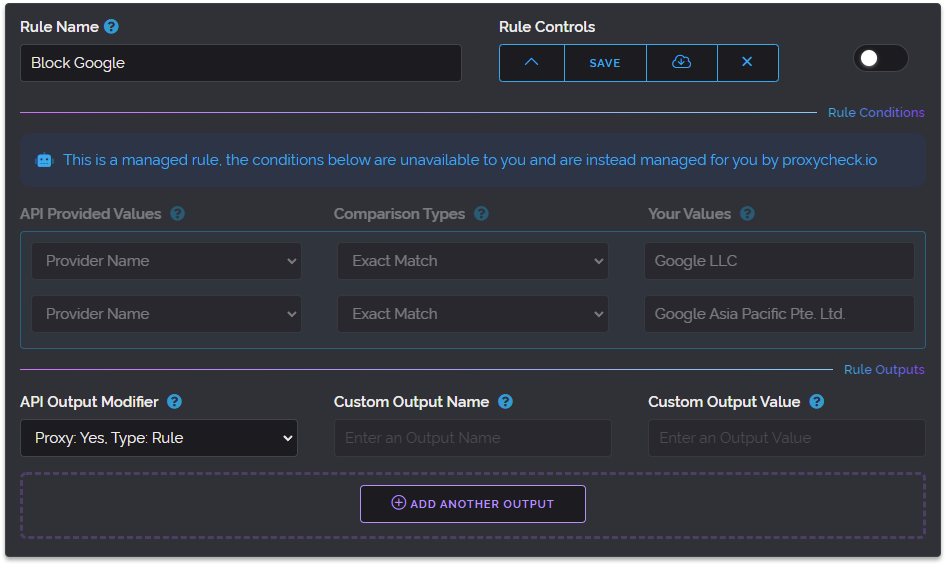 If we ever remove a managed rule from the library that you have saved then the rule you have saved will automatically transition to become a self-managed rule that you can fully modify. At present we haven't had any need to remove a rule from the library but it may happen in the future for instance if a company ceases to exist a rule targeting that company may no longer be needed.

Like all our rules you can import and export these easily and you can even export a managed rule, edit it in your favourite text editor and import it back to your account as a managed or self-managed rule instead.

Managed rules are available immediately for all accounts using our v2 API versions dated 2021 or newer.

Thanks for reading and happy new year!