After we updated our API yesterday it became apparent that some customers had really depended on our type responses only being present for positive detections which is understandable because we hadn't used this field for clean addresses before.

Because of this we've decided to push up our launch of the API version selector which we mentioned in yesterdays post to today. This means you can now choose which version of our API you want to be used (by the dates of major revisions) and when you select a version you'll get a neat explanation about what changed compared to the previous dated version like in the screenshot below. 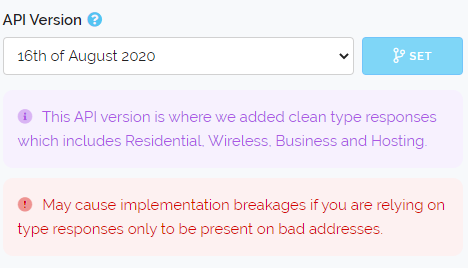 We are also providing a way for you to select which version gets used by adding &ver=date to the end of your queries. For example &ver=17-June-2020 and when you do that you'll get a version response back from the API like so:

Which lets you know the version you requested was in-fact the version you received. This version indicator will not be present if you're using the latest version of the API via the selection box in the dashboard (the default selection) or you've not provided the &ver= flag with your query.

We hope this will help customers to plan for future changes to the API so they can upgrade their implementations when they're able to do so instead of on our release schedule.

Thanks for reading and have a great week!